Recently, I was sitting down talking with Audrey about places we ought to visit before our time teaching ESL in Korea expires.  With just a few weeks left on my contract, I realized there was a place I had to take her before the harsh chills of winter crept up on us.  That place was the Korean Folk Village (한국 민속촌) located in Suwon/Yongin, South Korea.

The Folk Village is a living museum displaying various elements of traditional Korean culture and life.  Visiting in the fall, as we did, turned out to be a wise decision because of the gorgeous colours of the leaves surrounding us.  We enjoyed taking in various types of culture performances that included a tight rope walker, equestrian stunts and the reenactment of a traditional Korean marriage.  As wandered around we feasted on delicious Korean food with our favourite being pumpkin taffy candies.

The following is a photo essay and travel video capturing our time at the Korean Folk Village: 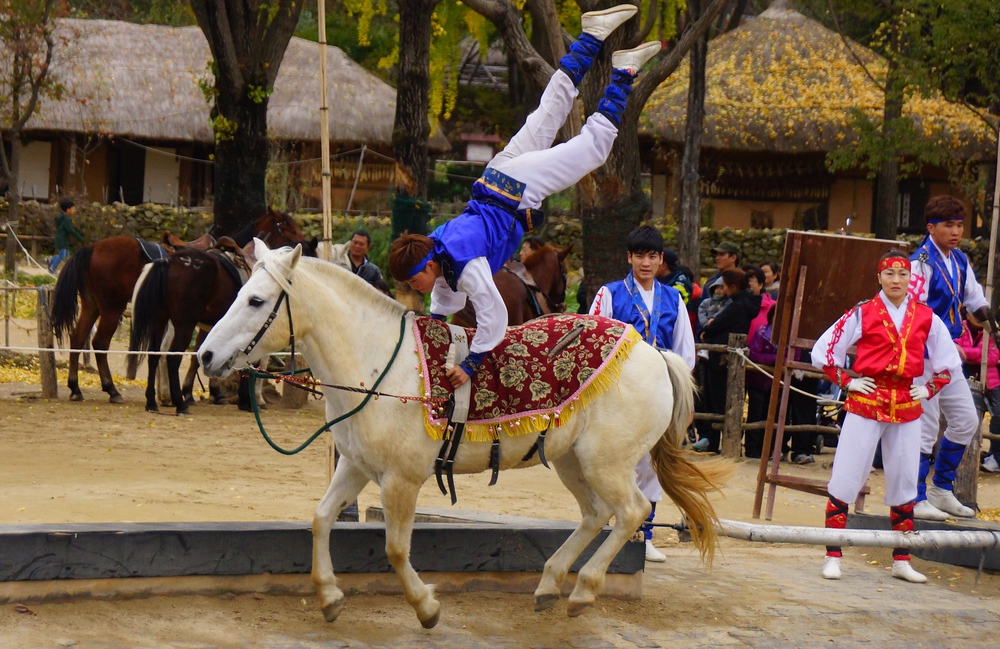 This Korean boy had the crowd mesmerized by his equestrian stunts at the Korean Folk Village. 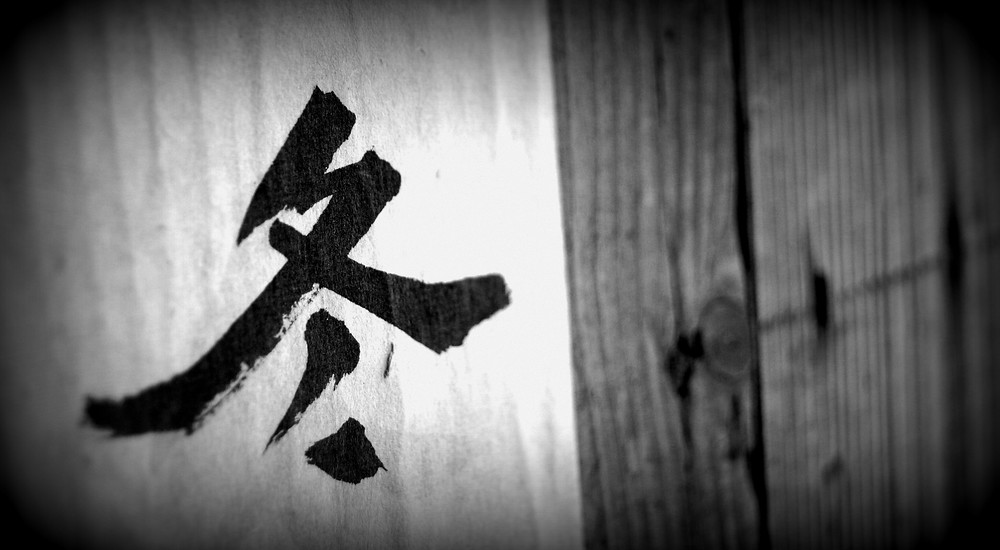 This is a traditional Chinese / Korean character written on one of the traditional homes at the Korean Folk Village.

The gorgeous colours of fall at the Korean Folk Village in Yongin, Korea. 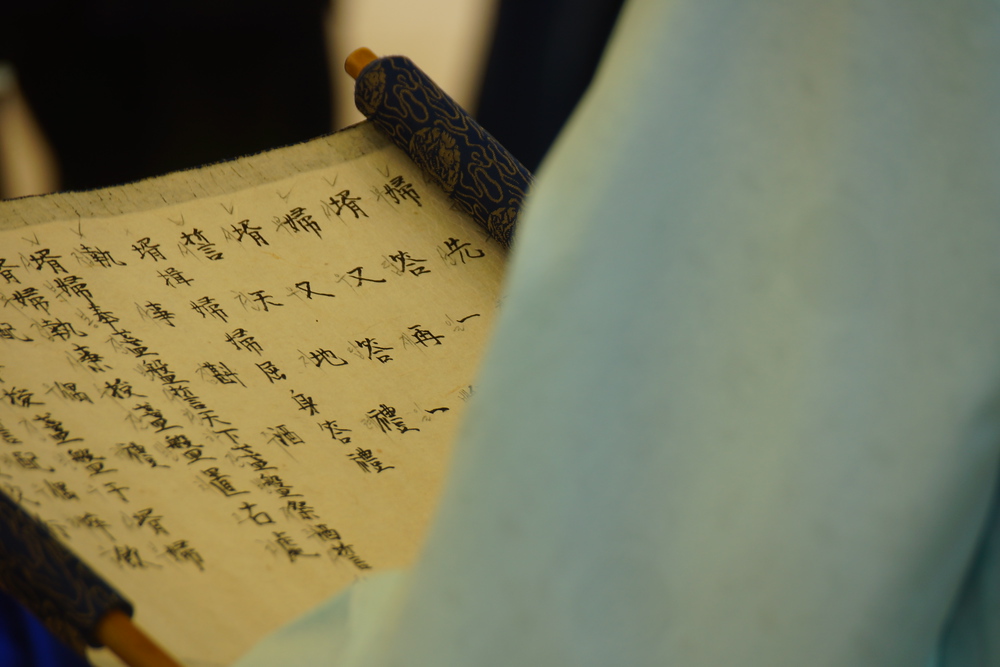 A Korean elderly man read from this Korean scroll during the traditional Korean marriage ceremony.

During the Korean traditional wedding ceremony this Korean man hauls some the newly-wed couples present and/or belongings at the Korean Folk Village located in Yongin, South Korea.

This is one of my favourite shots I’ve taken with Audrey. We were truly happy that day experiencing the Korean Folk Village together.

Our video from our experience at the Korean Folk Village

This Korean man dressed in traditional attire performed a hilarious take on the popular Korean song Gangnam Style by Psy. 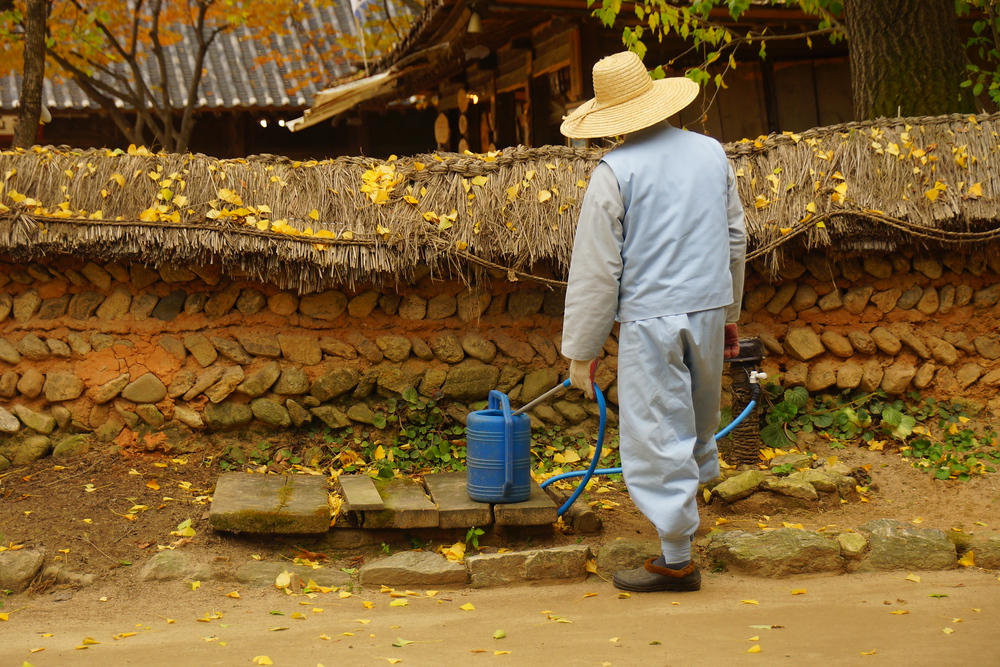 Here a Korean staff member dressed as a traditional farmer tends to a watering can.

This young Korean boy was definitely one of the stars of the show. Here he is pretending to be falling off of the horse as it races around the ring. 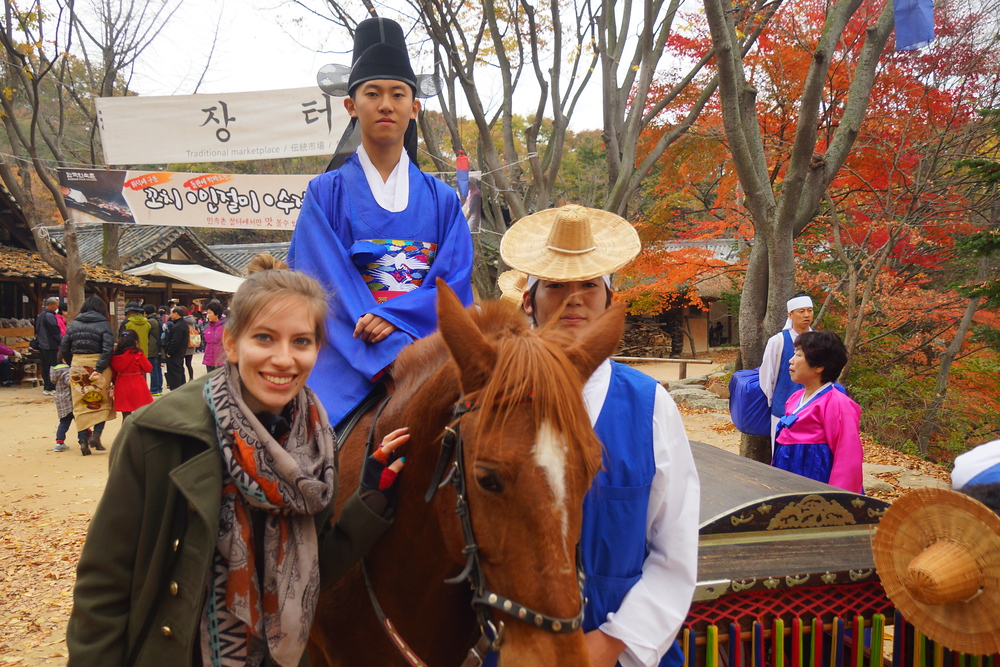 In this photo Audrey is posing with two Korean men who participated in the reenactment of the Korean traditional marriage ceremony.

This Korean equestrian rider is attempting to grab the cloth placed on the perimeter of the ring. Do you think he grabbed it or not? 😛

Audrey is definitely ‘the model’ in our relationship. If I was to stand in front of the camera more often it surely would be broken by now 😛 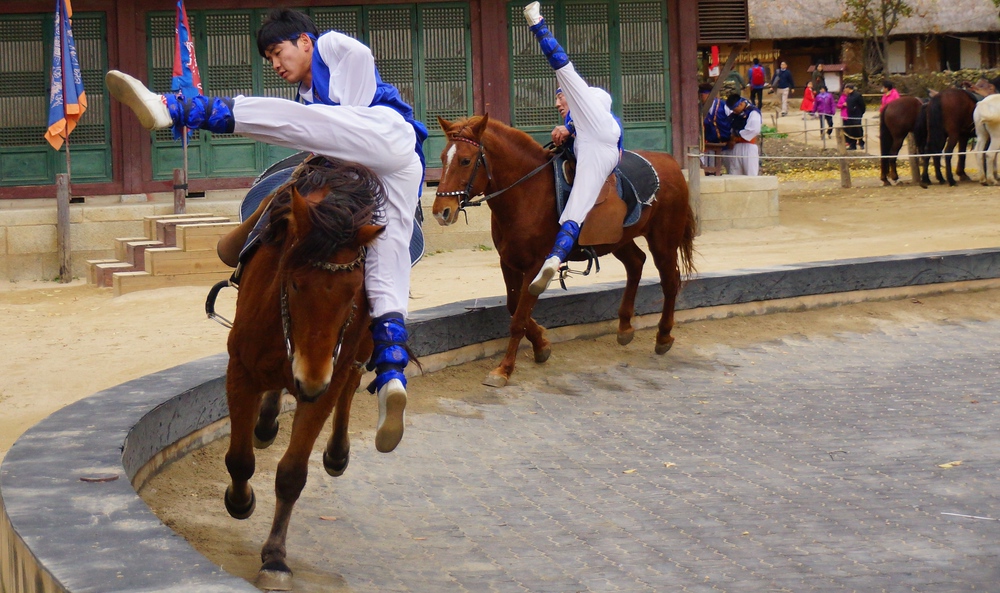 I know personally that I can barely ride a horse normally. I can’t imagine the amount of hours and training that would be required to perform such equestrian feats. 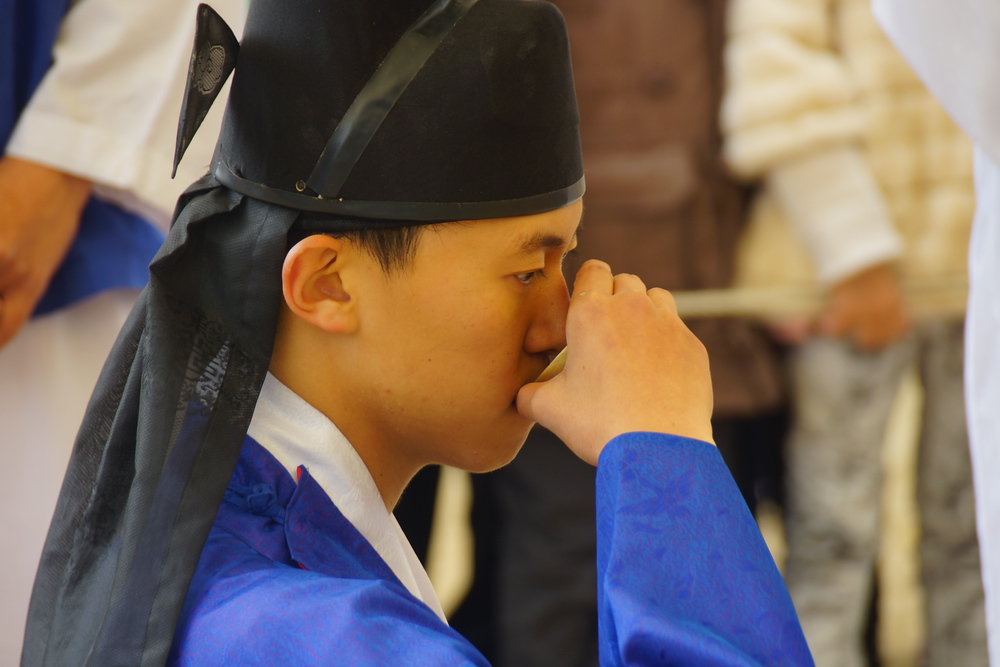 The Korean groom drinks from a cup during the wedding ceremony at the Korean Folk Village. 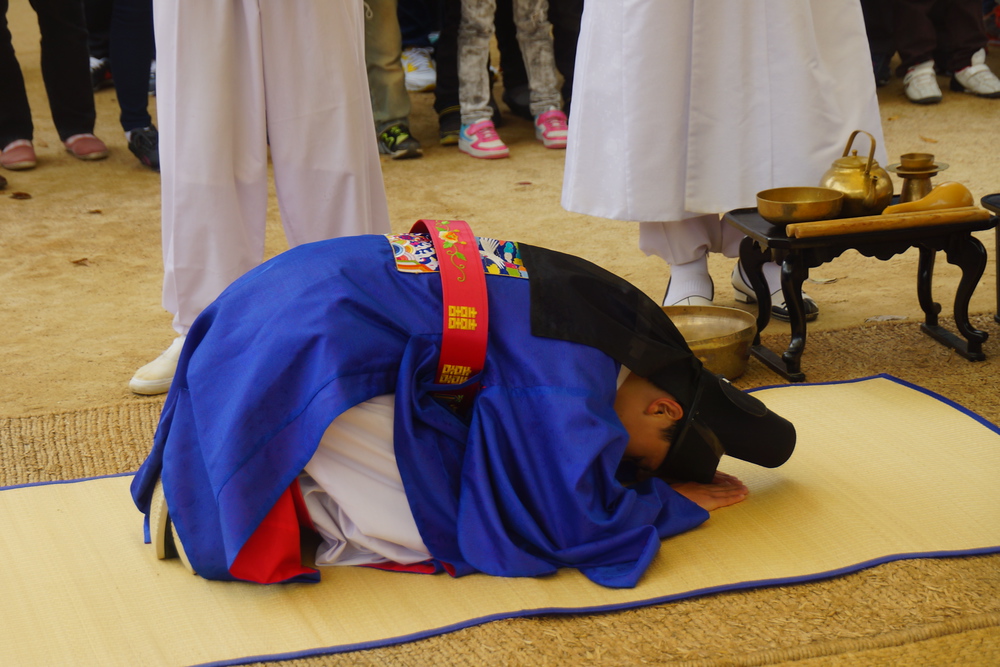 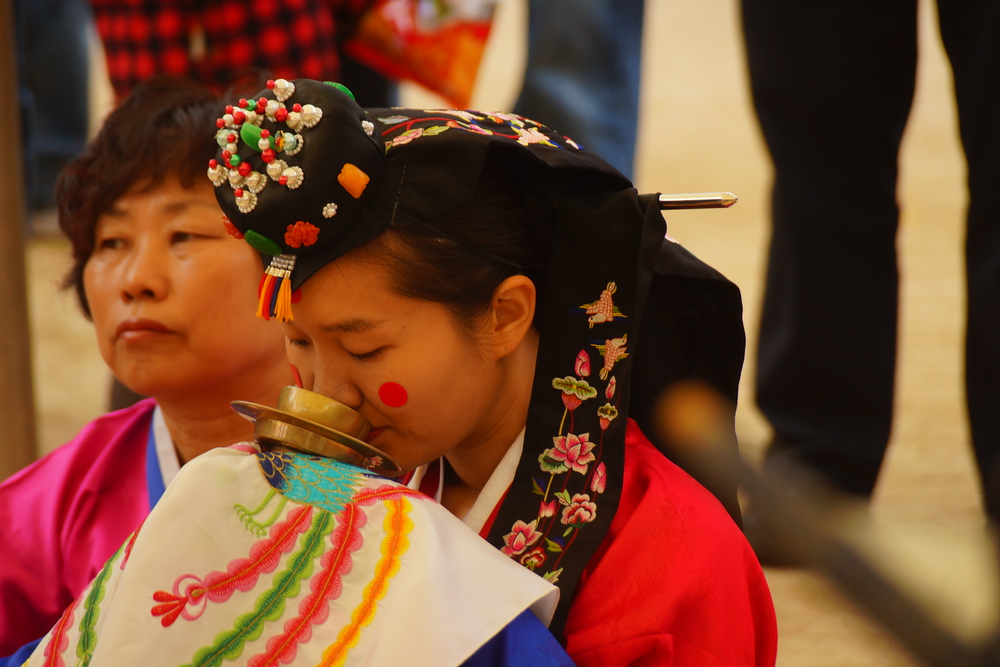 Here the Korean bride gracefully sips on the offering in her cup – Suwon, South Korea. 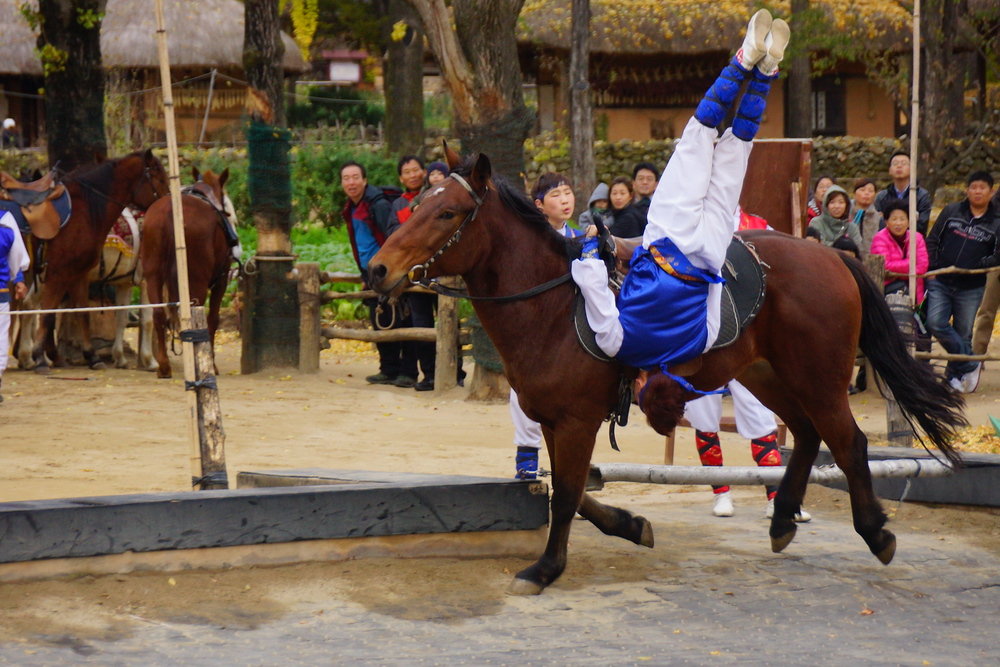 The stunts and overall athleticism of the Korean equestrian performers was truly off the charts spectacular. I think this qualifies under the category of ‘do not try this at home’ 😛

Everyone was racing to the front to capture a photo of the Korean performers but I thought it would be more interesting to capture what the crowd was doing. Taking photos with camera phones is all the rage in Korea these days. Actually, what’s just as common are photos with tablets and ipads.

A group of tourists with expensive photography gear huddle together to take the same photo. As a travel photography tip, I recommend doing exactly the opposite. Don’t try to take the photos that everyone else is doing. Instead head off on your own and look for creative angles and vantage points that are unique. 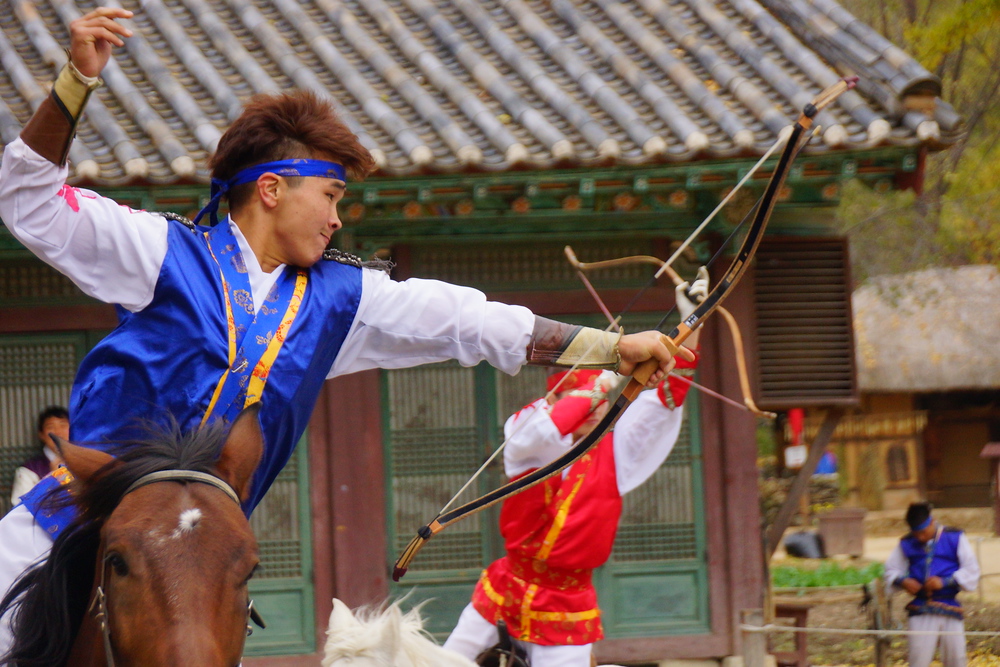 While riding the horses a select group of talented performers were shooting bows and arrows at the target in the centre of the ring.

Korean toilet for women at the Korean Folk Village. 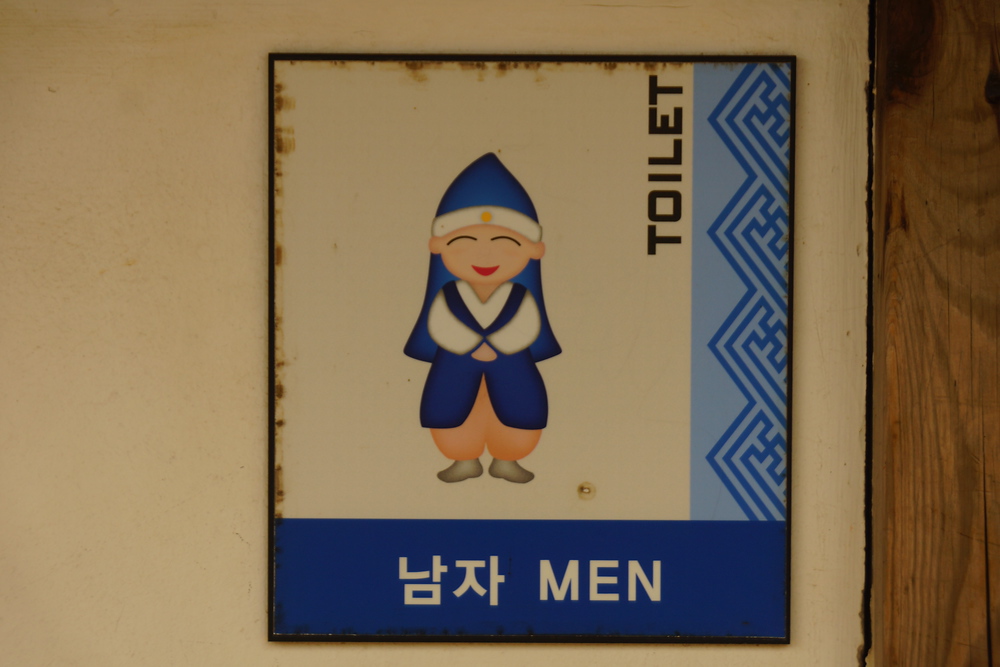 Here is the Korean toilet for men. If you travel enough in Korea you’ll notice that toilets often have colourful, humorous or animated types of signs