They say Virginia is for lovers, but I’d say Korea gives it some serious competition. Nowhere in the world have I seen so many couples in love. High school sweethearts holding hands across a table while they share a latte, young couples enjoying a weekend date and snapping photos of each other, married couples embracing while they wait for the bus to arrive on a cold winter day.

So what makes Korea so romantic?

Let’s start with the fact that there are so many holidays to woo your loved one. Korea has not one, but two Valentine’s Days. February 14 is when a girl buys her special man some chocolates to show her affection, and  exactly one month later on March 14, also known as White Day, it is the boy’s turn to return the favour with even more chocolates and perhaps a little extra something special.

But it doesn’t end there.

There is also Kiss Day on June 14 which is a perfectly acceptable excuse to have a make-out session (not that you need a reason to do so), and then Pepero Day on November 11, which is a time to buy your loved ones pretzel sticks covered in chocolate.

And if that’s not enough, you also have Hug Day on December 14 where you can give your partner a good squeeze.

Now would you like to guess how many of these holidays Sam and I completely missed?

Yup, all of them.

Not only is Korea covered in cafes, but they also have themed ones which are perfect for couples.

My favourite couple cafe to date has been Ann House. Picture a dollhouse with lots of pink, lace, chandeliers, and KPOP love songs playing in the background.

You get your own private booth with frosted glass doors, and inside you can share desserts and milkshakes while you snuggle on a flowery couch.

You’ve seen them on bridges and fences across Europe, and you can also find them in Seoul. N Seoul Tower to be exact.

This is a place to bring your sweetheart (once you’re sure they’re a keeper!) and lock your love on the fences along the viewing platform. Cute locks with hearts can be purchased just outside the tower, or you can bring your own.

After writing a sweet message, you lock it up with the other hundreds of thousands of locks that have been placed up there.

I’d like to say that you can then throw away the key, but that’s bad for the environment, so keep it as a souvenir instead.

For a conservative nation, Korea has some pretty kinky stuff going on.

Let’s begin with Haesindang Park (해신당 공원), better known as the Penis Park. Yup, not typo here. They do in fact have a park dedicated to the male appendage. It is located a few kilometers out of Samcheok in the Gangwon Province (in case you were wondering) and you can expect to see all kinds of…phallic sculptures.

I’d like to say that Sam and I have given in to this phenomenon, but that’s not the case. 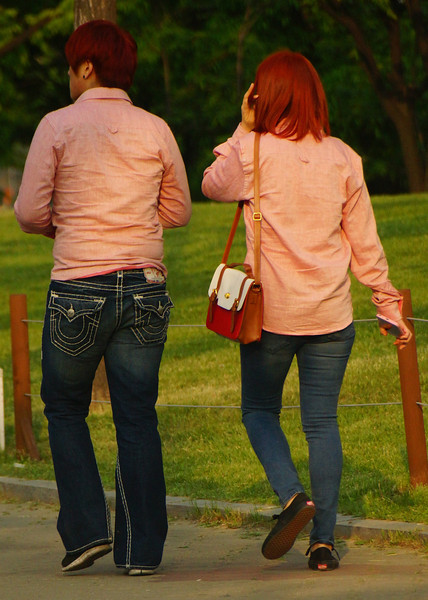 I remember being thoroughly amused when I saw this particular couple walking down a park in Yeouido last summer. Most people go for matching t-shirts or matching running shoes, but this couple took it to a whole different level with matching hair as well.

If that doesn’t spell commitment, I don’t know what does.

Maybe we should get matching Korea t-shirts before we leave? 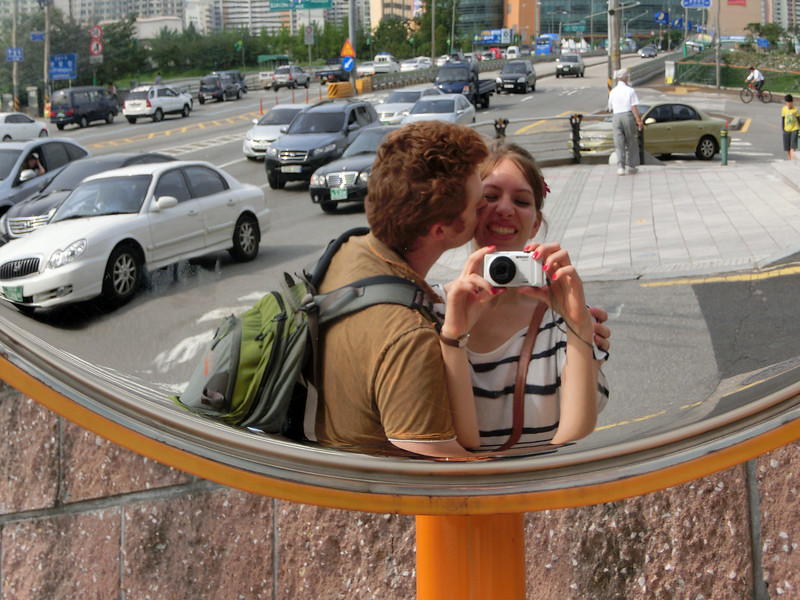 And lastly, Korea is special to us because that is where we met. Aww!

What’s the most romantic place you’ve been to?